After hearing about organic farming practices in Tasikmalaya, West Java, a skeptical young entrepreneur took a trip to the region to see the farms. When she arrived, instead of finding well-structured agricultural practices, she met desperate farmers lost in the bureaucratic scuffle of organic certification and export regulations. Inspired by their plateaued dreams, Emily Sutanto decided to take on the project as their leader.

Sutanto, the director for Bloom Agro International, was born in Indonesia but moved overseas when she was 9 and has since lived all over the world.

“I studied mass communication and international management while at university in Los Angeles, [but] I was never interested in the environment or ecosystems before visiting the farms in Tasikmalaya,” she said.

Sutanto was initially convinced that the claim of organic farming in the region was just a front, an advertising technique. “This is Indonesia and there are so many fraudulent organic products out there that have not actually received the right certification,” she said.

To her surprise, she observed the farmers’ use of an organic farming method known as the System of Rice Intensification, which is a set of production practices that improves the yield of the crop while decreasing external input. The SRI method is unique in that farmers transplant the rice and manage the soil, water and weeds by growing the rice in unflooded fields, decreasing the amount of water needed and increasing the yield.

SRI was first introduced to Indonesia in 1998 as part of a “farmers’ revolution.”

“The farmers realized that the land was sick, heard about the SRI method and attempted to implement it,” Susanto explained.

She immediately saw an opportunity to help the farmers sell their rice to the large international market for organic products. “I realized that the SRI method helps the farmers’ livelihood, helps to save water resources and helps to secure food sources for the future.”

Susanto started her company, Bloom Agro, in March 2008 to serve as the distributional bridge between the farmers and the international market. As director, she chose the organic certification program of the Institute For Marketecology (IMO) Swiss because its organic certification and fair trade programs are recognized by the European Union, the US Department of Agriculture’s American Organic Program and the Japanese Agricultural Standard — the three strictest standards for meeting organic certification. Susanto then brought in organic farming experts from the IMO to train more than 2,000 Tasikmalaya farmers to meet the certification standards.

Each of the farming groups sent representatives to conferences where they learned organic farming practices such as using natural manures, eliminating chemical pesticides from their farming, weeding, transplantation of young seedlings and minimal flooding methods.

Sutanto then had to convince the Ministry of Agriculture, Ministry of Trade, Ministry of Finance and the State Logistics Agency, which deals with food distribution and price control, to allow the farmers to sell to the international organic rice market.

Before Sutanto’s work, there were no organic certified rice farmers in the country. Now, 2,333 farmers in seven subdistricts and 28 groups are involved in the organic rice farming and fair trade practices program.

Popular posts from this blog

Planning to visit Portland? Don't let any of these gems slip off your list: 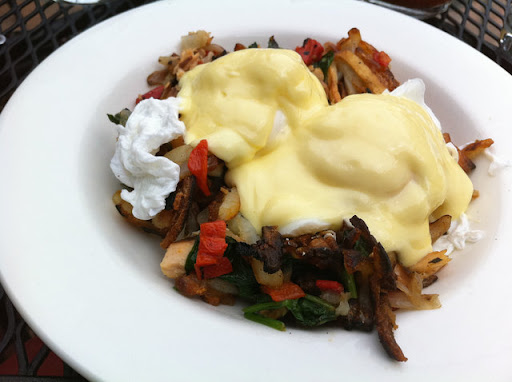 BY MICHELLE UDEM AND DAN SCHLEGEL

People in Portland love to talk about food. Specifically, they love talking about the same food. Over and over. So much so that, in the constant barrage of foodie-speak, reviews, and buzz, certain restaurants get lost in a sea of hype and repetition.

Fado
Sunnyside
What you’re getting: Peixinhos da horta and the sautéed shrimp

Hidden in plain sight, Fado is the best-kept secret in Sunnyside, serving owner Nick Ross’ grandma’s traditional recipes that he came to love during his childhood days in the Bay. (He’ll be wearing a Giants hat, and he sports it w…
Read more

Recycling: getting to know your plastics

February 16, 2010
Last year, bisphenol A (BPA), a chemical compound found in clear hard plastics, scared many people into questioning the hazards found in the plastics they use in their everyday lives, especially water bottles. The media carried headlines with talk of BPA causing hormone imbalances and several types of cancer. Now that the plastics industry has calmed fears of BPA by removing the chemical from plastic products and adding a "BPA-free" label in its place, what about the other plastics in our lives? After becoming aware of the potential dangers of plastics, we should now focus on minimizing their use and effective recycling.

Plastics are part of almost every aspect of the average American's lifestyle. To name just a few, our everyday synthetic tools, toothbrushes, disposable bags, toys, food packaging, and computers all contain plastic. And most of these plastic products will have the "chasing arrows" symbol indicating that it is recyclable. However, this symbol is …
Read more

MICHELLE UDEM
I am a media enthusiast, news junkie and digital project manager. I've written, researched, and packaged news stories in NYC. Here in Portland, I'm now working in tech, managing development teams and getting products/projects to the finish line. As an outlet for my favorite pastime, through this blog, I will poke and probe at newsy and not so newsy environmental & food headlines.